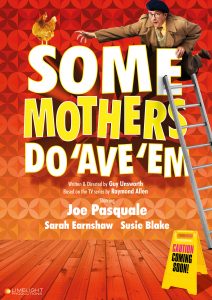 Joe Pasquale will star as the loveable but accident-prone Frank Spencer in the first ever stage production of the classic 1970s TV comedy, Some Mothers Do ‘Ave ‘Em. Sarah Earnshaw will play his long-suffering wife Betty and Susie Blake his disapproving mother-in-law, Mrs Fisher. The stage adaptation has been written by Guy Unsworth, based on the original TV series by Raymond Allen. Guy Unsworth will also be directing, with design by Simon Higlett.
The UK Tour of Some Mothers Do ‘Ave ‘Em will open at the Wyvern Theatre, Swindon on Wednesday 21 February 2018, with a national press night on Tuesday 13 March at the Churchill Theatre, Bromley.
Comedian Joe Pasquale has delighted audiences with his live stand-up tours for over 20 years and made his theatrical debut in 1999 in Larry Shue’s The Nerd, followed by the touring productions of Tom Stoppard’s Rosencrantz and Guildenstern Are Dead, Mel Brooks’s The Producers, The Wizard of Oz and, more recently, the West End and touring productions of Spamalot, as King Arthur. In addition, Joe was crowned ‘King of the Jungle’ in ITV’s I’m a Celebrity… Get Me Out of Here! in 2004, and hosted the long-running television series The Price is Right for ITV.
Sarah Earnshaw will be starring as Jennifer Lore in the UK Tour of Nativity – The Musical this autumn, and other theatre credits include Travels With My Aunt (Chichester Festival), The Lady of the Lake in Spamalot (West End and UK Tour) and the original London cast of Wicked.
Susie Blake regularly appeared in the TV series and comedy specials of Victoria Wood, Russ Abbot and Stanley Baxter, and is perhaps particularly loved as the Continuity Announcer in Victoria Wood: As Seen on TV. More recently, she played regular Bev Unwin in Coronation Street from 2003 – 2006 and then made a comeback in 2015, and regular Hillary Nicholson in Mrs Brown’s Boys. Her films include Fierce Creatures and Nativity 3: Dude, Where’s My Donkey?!. Her theatre credits include Grumpy Old Women Live 2 & 3, When We Are Married (West End), Pygmalion (Chichester Festival Theatre), Madame Morrible in Wicked (West End) and Belinda Blair in Noises Off (National Theatre).